We have a precise reference point to answer this question!

We thought that the C14 radiocarbon method would give us the independent irrefutable dating of objects, but it doesn’t because the historians have smuggled therein their erroneous chronology. To make matters worse, we have made thousands of nuclear explosions that have distorted the picture.

We have the remnants of a Supernova explosion called the Crab Nebula that shone for a couple of months above our heads about 1000 years ago. Alas, the date of this Bang is approximate, AKA +/- 100 years calculated on the basis of changes in photographs for the last 150 years. 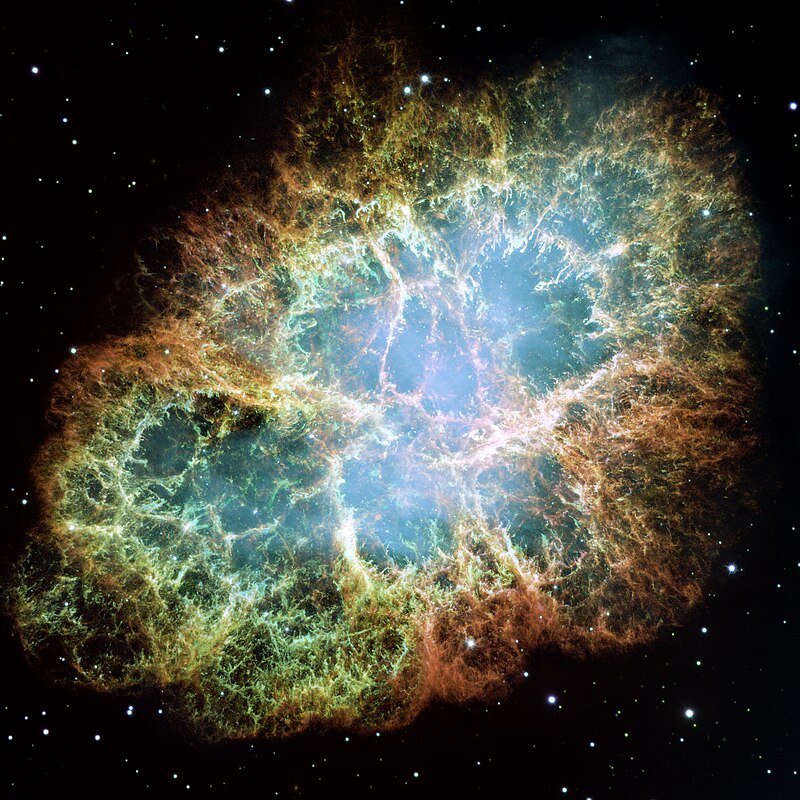 my is precise by definition; therefore, if a date can be calculated from the irrefutable, verifiable, and independent information contained and extracted in the event, it is considered true.

The date of such an event may serve as the origin of coordinates to fix historical events to their more probable positions on the time axis. The sky provides us with such a visible phenomenon.

The astronomers found the exact date of the explosion of the Crab Nebula Supernova in XII century A.D. in the Taurus constellation by calculating its expansion speed by comparing its photographs taken from 1844 to 2018.

Dozens of ‘ancient’ learned chroniclers and astronomers report about the appearance of very a bright star approximately 1000 years ago. These reports are often conflicting as they used real or imaginary phenomena in the sky to stress their local events.

Corollary A: an irrefutable astronomical phenomenon itself serves as the reference point for the dating of historical events and not the dates of astronomical events found in chronicles of refutable dates and/or origin.

Corollary B: taking into account the irrefutable events only, confirmed by exact sciences the true timeframe of human history does not exceed 1000 years. All ‘ancient’ histories are ‘on agenda’ produce of  XVI-XXVIII centuries.

Corollary C: the explosion of the Crab Nebula Supernova is a reference point for datings events on the time axis. Today we are in 967, not in 2021 AD.

In 1921, Carl Otto Lampland was the first to announce that he had seen changes in the structure of the Crab Nebula. This announcement occurred at a time when the nature of the nebulas in the sky was completely unknown. Their nature, size, and distance were subject to debate.

Observing changes in such objects allows astronomers to determine whether their spatial extension is “small” or “large”, in the sense that notable fluctuations to an object as vast as our Milky Way cannot be seen over a small time period, such as a few years, whereas such substantial changes are possible if the size of the object does not exceed a diameter of a few light-years.

Lampland’s comments were confirmed some weeks later by John Charles Duncan, an astronomer at the Mount Wilson Observatory. He benefited from photographic material obtained with equipment and emulsions that had not changed since 1909; as a result, the comparison with older snapshots was easy and emphasized a general expansion of the cloud. The points were moving away from the center and did so faster as they got further from it.

In 1928, Edwin Hubble was the first to note that the changing aspect of the Crab Nebula, which was growing bigger in size, suggests that it is the remains of a stellar explosion. He realized that the apparent speed of change in its size signifies that the explosion which caused it occurred barely nine centuries ago.

Imagine a mini droplet with different micro areas. And suddenly, this droplet with its micro areas inflates to the point that each micro area becomes a whole giant world, and very quickly, in the blink of an eye, even light from neighboring regions does not keep up with this inflation.

And if the light from those areas could not reach us, these regions with different physical conditions lie beyond the event horizon for us. The physicist Andrew Linde came up with a theory.

As a visible illustration of his theory, he offers to imagine a painted multi-colored balloon. When the ball is small, the colored spots on it are tiny; when the balloon is inflated, colored spots increase, with each spot representing a separate world with its own set of constants.

That is how today’s science imagines the universe. But people are always interested not only in the present but also in the future. Therefore, there are many hypotheses about the future of the universe.

People have noticed that the time of evolution seems to shrink. Many scientists from different fields of science felt that the course of historical events was accelerating and not compacted.

For tens of thousands of years, people lived in a primitive state, dressing in skins and brandishing stone axes and clubs. For thousands of years, they fought with bows and arrows. Then they invented the firearms with which humanity had been fighting very bloody wars for hundreds of years.

Over these hundreds of years, progress has accelerated, and people developed nuclear and hydrogen bombs. Today, technology, new generations of computers, and telephones are already being replaced in a matter of years.

Soon, biological persons will stop keeping up with technical progress because the time of growth, maturation, and learning takes decades, and it is tough for older people to relearn. At the same time, life expectancy is constantly increasing.

People have always been the source of progress, and now they are slowing it down.
Acceleration is observed not only in the evolution of technology by us but also in the universe.
If we mentally fit our entire evolution into one year, it turns out that the end of the formation of the Earth from the gas-field cloud ended on January 1.

We have a sterile planet ready, and the counter is running. Life on the planet was born around April 1. The first primitive unicellular. Multicellular organisms originated around October 1. The first vertebrates – around December 1. Dinosaurs appeared in mid-December and reigned until December 25th.

The first primitive primates on the planet arose on December 28. The first intelligent creatures – Neanderthals, who were later swept away from the stage by our ancestors Cro-Magnons, emerged in the evening on New Year’s Eve, i.e. Dec. 31. Our Homo sapiens species appeared in the historical arena on December, 31 at 23:57 minutes.

Ancient Egypt and Babylon flourished at 23:59:10. Jesus Christ was born at 23:59:50, 10 seconds before the present moment. The emergence of science, the industrial revolution, large-scale development industries on the planet, and the massive transition of residents from the village to the city, i.e. turning peasants into industrial workers, all started 1 second before the New Year at 23 hours 59 minutes 59 seconds.

If almost five billion years are fitted to a scale of one year and look at the time of birth of various phenomena, only then can you understand the most powerful process of accelerating evolution, which has recently been almost explosive? Of course, someone had to formalize these observations, that is, to translate them into the language of mathematics.

New Chronology “Do we know our history” (1st episode of 24)

New Chronology “Truth Can Be Calculated” (episode 3 of 24)

New Chronology “Alchemy of the Pyramids” (episode 4 of 24)