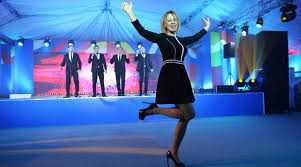 MOSCOW, RUSSIA –  Maria Zakharova, spokeswoman of the Ministry of Foreign Affairs announced this morning they are prepared to bail out the United States government. The announcement comes amid speculation that the U.S. Government would be forced to default on this month’s debt payment to China.

According to a source in the MFA, who declined to be named because she is not yet authorized to speak on the matter, Russia will fund the bailout with gold, silver, and precious stones currently stored in Kremlin.

Although the bailout will stave off an immediate Chinese takeover of the U.S. Government, Russian officials have privately expressed concerns that, at the current rate of government spending, the government may once again be in financial trouble within the next 5-6 months.

Another source who also declined to be named, Russia will let the USA fund the bailout with funds of Russian oligarchs deposited in the offshore jurisdictions. According to this source, it is unclear whether Russia will demand the USA to lift sanctions imposed on it because of the reintegration of Crimea with mother Russia.